Skip to content
Home » Information » What Are Lincoln Logs? A Great Big Guide 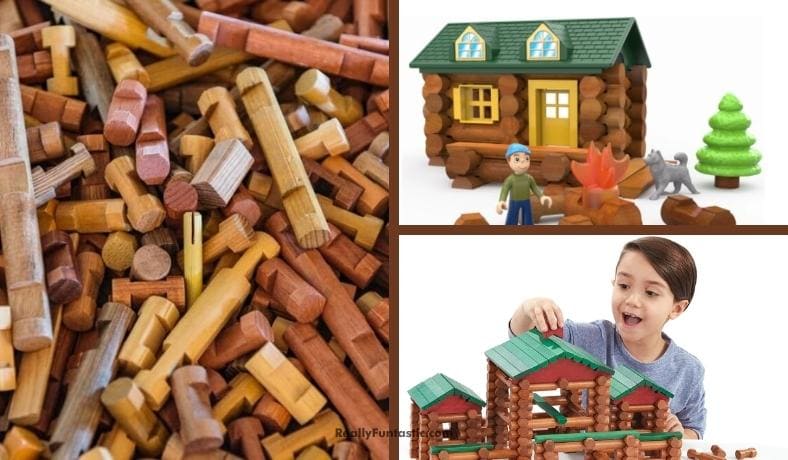 What Are Lincoln Logs? 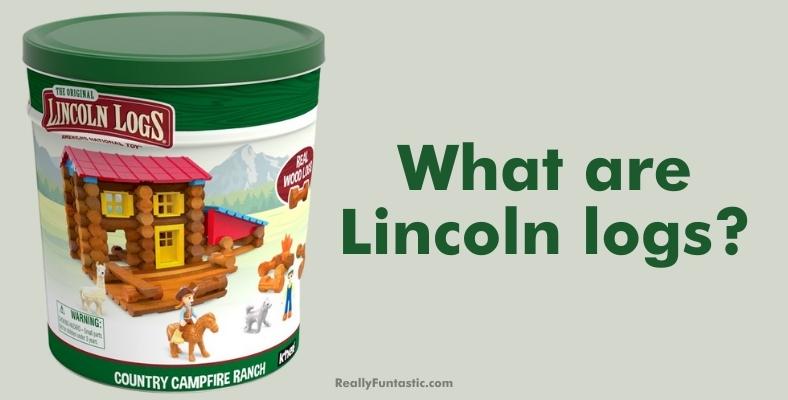 Lincoln Logs are an interconnecting log-style block toy that children can use to construct farms, cabins, and other buildings.

Each piece is approximately two to three inches long. There are also smaller notched pieces to keep the longer interlocking beams stable.

Why Do They Call Them Lincoln Logs?

The name stuck. Lincoln Logs took their name from Abraham Lincoln, America’s sixth president. With the combination of rampant patriotism and nostalgia for bygone eras, the toys were an instant success.

Where Do Lincoln Logs Come From?

For a toy so straightforward to use, Lincoln Logs have an exciting history.

The Lincoln Log was the brainchild of John Lloyd Wright, the son of famous architect Frank Lloyd Wright.

At the time, father and son were collaborating on an earthquake-proof design for the Japanese Imperial Hotel. To ensure the hotel stood up to the design instructions and survived earthquakes, its foundation used a combination of interlocking log beams.

The design was a success, and in 1923, the Imperial hotel was one of a handful of buildings to survive the Great Kanto Earthquake.

Inspired and in need of money, John Wright sketched a smaller-scale model of the hotel on architectural blueprints. He took the blueprints to his newly founded Red Square Company in 1916. By 1918, Wright owned the patent for “Toy Cabin Construction.”

When Did Lincoln Logs Come Out?

The renamed Lincoln Logs hit the market in 1918. Their slogan ran, “Interesting playthings typifying the spirit of America.”

Americans thought so, too, because the notched miniature logs were a success. A significant part of the Lincoln Logs’ popularity came from the fact it was one of the first toys to be marketed at both boys and girls.

Are Lincoln Logs Real Wood? Are They Sometimes Made of Plastic?

Traditionally, Lincoln Logs are wooden. This was another factor that contributed to their success with children because while other toys suffered shortages during World War II, factories kept producing Lincoln Logs.

This was because early Lincoln Logs construction sets were made of redwood. The roof pieces came in red or green, but that was as elaborate as Lincoln Logs got. The aim was to give children tools to reconstruct log cabins accurately, reflected in the toy’s appearance.

However, in the 1970s, Lincoln Logs started offering plastic pieces, to parents’ dismay everywhere. Shortly after, it reverted to natural wood.

But plastic came back when K’Nex took over the Lincoln Logs brand and outsourced production to China. It wasn’t until 2016 that the construction toys saw a return to wood.

As the Lincoln Logs centennial approached, Pride Manufacturing, a company that produces golf tees, heard K’Nex wanted to insource its notched logs and, if possible, revert to the wooden originals.

Pride Manufacturing couldn’t offer the logs completely in redwood, and these days, Lincoln Logs are made of several kinds of wood.

What Type of Wood Are Lincoln Logs Made From? 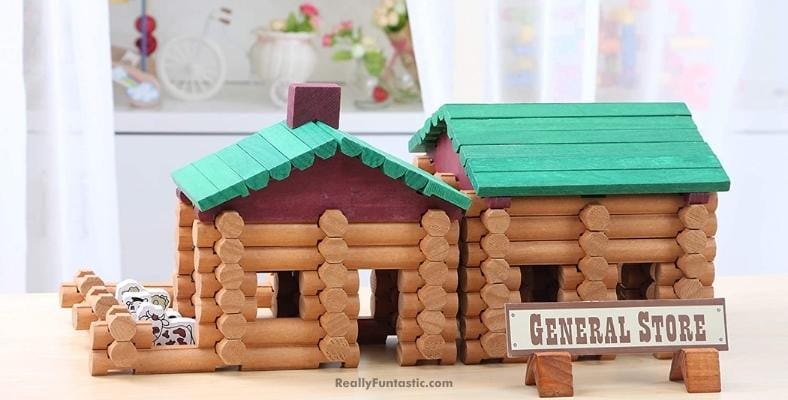 While the original Lincoln Logs were made from redwood, that changed when K’Nex began insourcing their product in 2016.

The 1970s plastic version of the logs never sold well, and by the ’80s, they were scrapped. However, there was no way for Pride Manufacturing, who took over the production of everyone’s favorite construction toy, to return to the original redwood.

But Pride Manufacturing has mills as part of its production, so these days Lincoln Logs are made from various types of wood. The most prominent today is high-quality maple wood.

What Can You Build with Lincoln Logs? 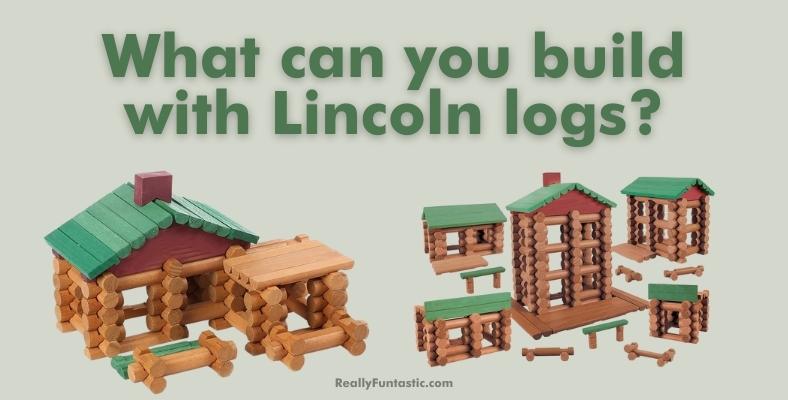 When Lincoln Logs first came out in 1918, it featured two model log cabins children could reproduce. These were:

These days the interlocking beams have branched out, and there are now options to build:

We grew up with a town hall Lincoln Logs model. And the historical connection is still there, with options to build models of things like Davy Crocket’s homestead.

And while the early models were nothing but wooden logs, the more recent sets also include figurines and occasionally stickers. 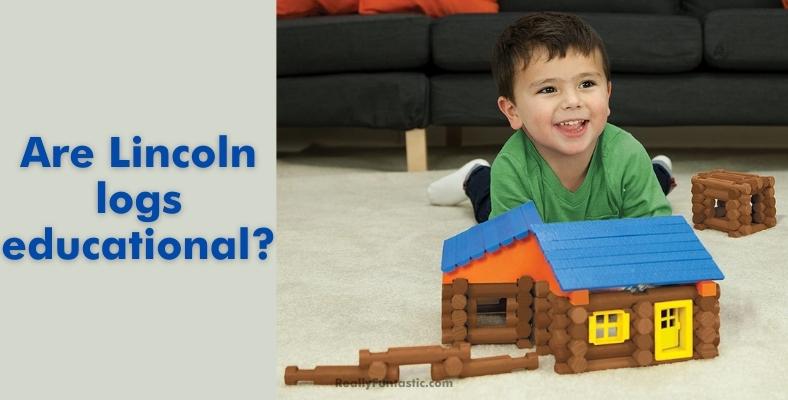 Lincoln Logs make for fun construction toys, but they can do a lot more than that. The historically-themed models provide an opportunity to teach history to the young, inquiring mind.

But history isn’t the only educational outlet Lincoln Logs offers. Creative teachers see opportunities for STEM learning in Lincoln Logs and swap the notorious pioneer playhouses for things like catapults.

Why Lincoln Logs Are Good for Kids 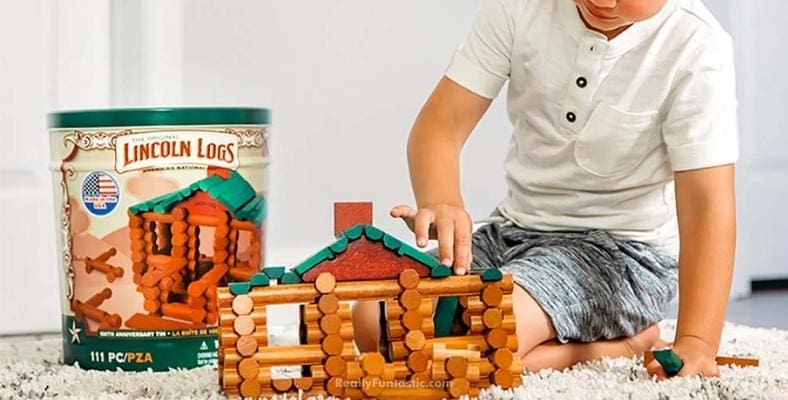 The wonderful thing about the Lincoln Log, and the reason it’s endured for so long, is that provided you keep the wooden pieces at right angles, you can build almost anything.

This opens up a space for imaginative play. While Lincoln Logs has its share of themed sets, pieces, and designs, one of the things we love about the toy is that you can still buy non-prescriptive tins.

In a world where Lego and Playmobil move ever towards themed sets, that’s a rarity. We love the possibilities a generic Lincoln Logs tin inspires.

More than that, though, Lincoln Logs help foster special awareness in young children, and manipulating the blocks improves fine motor skills. Slotting the notched wooden beams into place takes practice, and building a roof that keeps its shape requires even more skill.

Moreover, because Lincoln Logs owe their existence to an architect, children who play with them develop a better grasp of mathematics than their peers as they work out how many building logs to use and where to put them.

The more adventurous child can even combine Lincoln Logs with Lego for more complex structures. However, you need access to a 3D printer to successfully extend the logs or a Universal Construction Kit.

What Ages Are Lincoln Logs Good For?

Lincoln Logs are suitable for children ages three and up. Younger than that, and the smaller logs used to shore up the more extended pieces can pose a choking hazard. 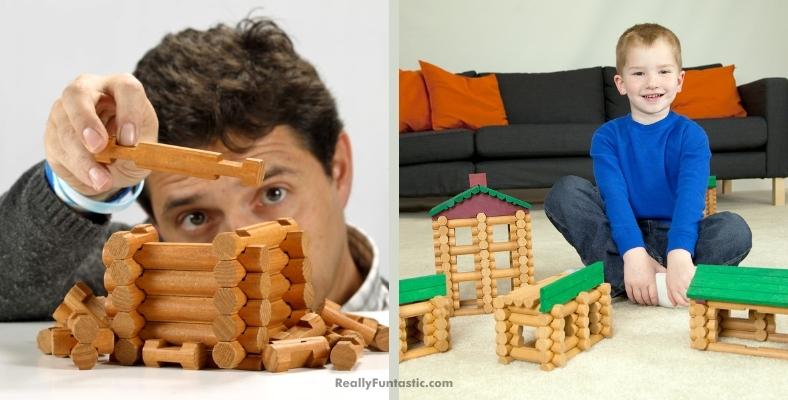 Building on the success of Lincoln Logs, John Wright tried to create a successor to his construction toy. He called the new product Wright Blocks, and it enabled children to build everything from castles to towers.

But Wright Blocks were too complicated and the shapes too intricate, so it never took off. Lincoln Logs, on the other hand, the simple country cousin, remains popular.

It’s one of the oldest toys still in production. In 1999 Lincoln Logs entered the Toy Hall of Fame.

Lincoln Logs were also one of the first brands to debut on TV once advertisers realized you could intersperse ads with popular TV programs and influence viewers to buy them. The early commercials drove the toys’ success and help explain why years later, they’re still providing generations of kids with hours of innovative fun.

The building that inspired their creation was deconstructed in 1968. The Lincoln Log, however, lives on. They’re still sold in metal tins and engender hours of imaginative play for kids everywhere.